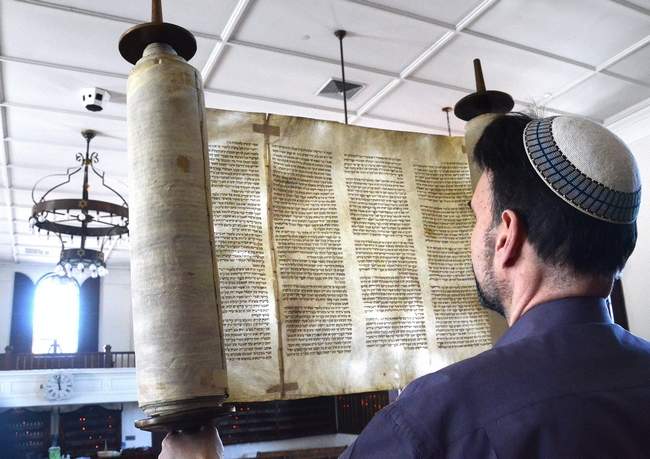 Since March 25, 2015, Temple Israel has housed one of the Memorial Scrolls Trust’s Torah scrolls (MST #486) on permanent loan. This historical document is used for the celebration of all life-cycle events that affirm the continuity of the Jewish people. Those events include baby namings, B’nai (Bar/Bat) Mitzvahs, and Aufrufs (the blessing of bride and groom).

The Czech scrolls, including MST #486, are survivors and silent witnesses. They represent not only the lost communities of Bohemia and Moravia — where they originated — but all those who perished in the Shoah.

What is the Holocaust Torah?

In 1938 and 1939, Hitler’s forces invaded what was then Czechoslovakia, which was home to a substantial Jewish population. In most countries that suffered a similar fate, confiscated ritual items were immediately destroyed. However, in Bohemia and Moravia, the Jewish communities were instructed to pack their “historically valuable” items to send them to the Jewish Museum in Prague. There, the artifacts were carefully cataloged and preserved. The Jews were then deported to concentration camps, from which most of them never returned.

Hundreds of thousands of Jewish ritual items survived World War II, among which were approximately 1,800 Torah scrolls. After the war, the remaining Jewish congregations attempted to re-establish themselves in the Czech Republic and became the natural depositories of some of the surviving artifacts. However, by 1948, the Communists had taken over the government, closing synagogues and repressing once more the expression of Jewish faith and communal life in the country.

The repossessed scrolls were transferred and warehoused in the ruined synagogue at Michle outside Prague, where they remained until 1964. By then, the Communist government of Czechoslovakia — in need of financing — decided to sell the scrolls to a London-based art dealer, Eric Estorick. Acting on behalf of one of his clients, Ralph Yablon, Estorick purchased and brought back to London 1,564 rolls.

Given the considerable scale of the project, a team of sofrim (scribes) spent months cataloging the scrolls. Part of their assignment was to determine which ones were kosher (fit for ritual use), which could be repaired and/or restored, and which could only be used as part of a memorial due to their poor condition.

The Memorial Scrolls Trust was established as a charity whose goal is to allocate the scrolls to communities and organizations around the world. The scrolls are never sold or donated but allocated on loan. Communities that close or merge with other Czech scroll-holders are obliged to return their scroll to the Trust.

MST Scroll #486 is on permanent loan to Temple Israel. Rabbi David Senter z”l officially announced its arrival on Yom HaShoah, Holocaust Remembrance Day, on Sunday, April 19, 2015. Like 216 of the original 1,564 scrolls, MST Scroll #486 is an “orphan scroll” that lost its MST identity plaque, making it impossible to trace it back to its community of origin.

In recent years, MST Scroll #486 was held in the care of the Chatham Jewish Center until the dwindling community merged with the TriBeCa Synagogue in the 1980s. It was brought to TriBeCa Synagogue for safekeeping, where it remained until 2014, when it was returned to the Memorial Scrolls Trust.

The mission of the Holocaust Torah Committee is to fulfill the congregation’s obligations as the custodian of MST Scroll 486. The committee promotes a higher awareness of the Holocaust as a unique historical event with universal implications for today, leveraging the lessons of history to promote tolerance and understanding.