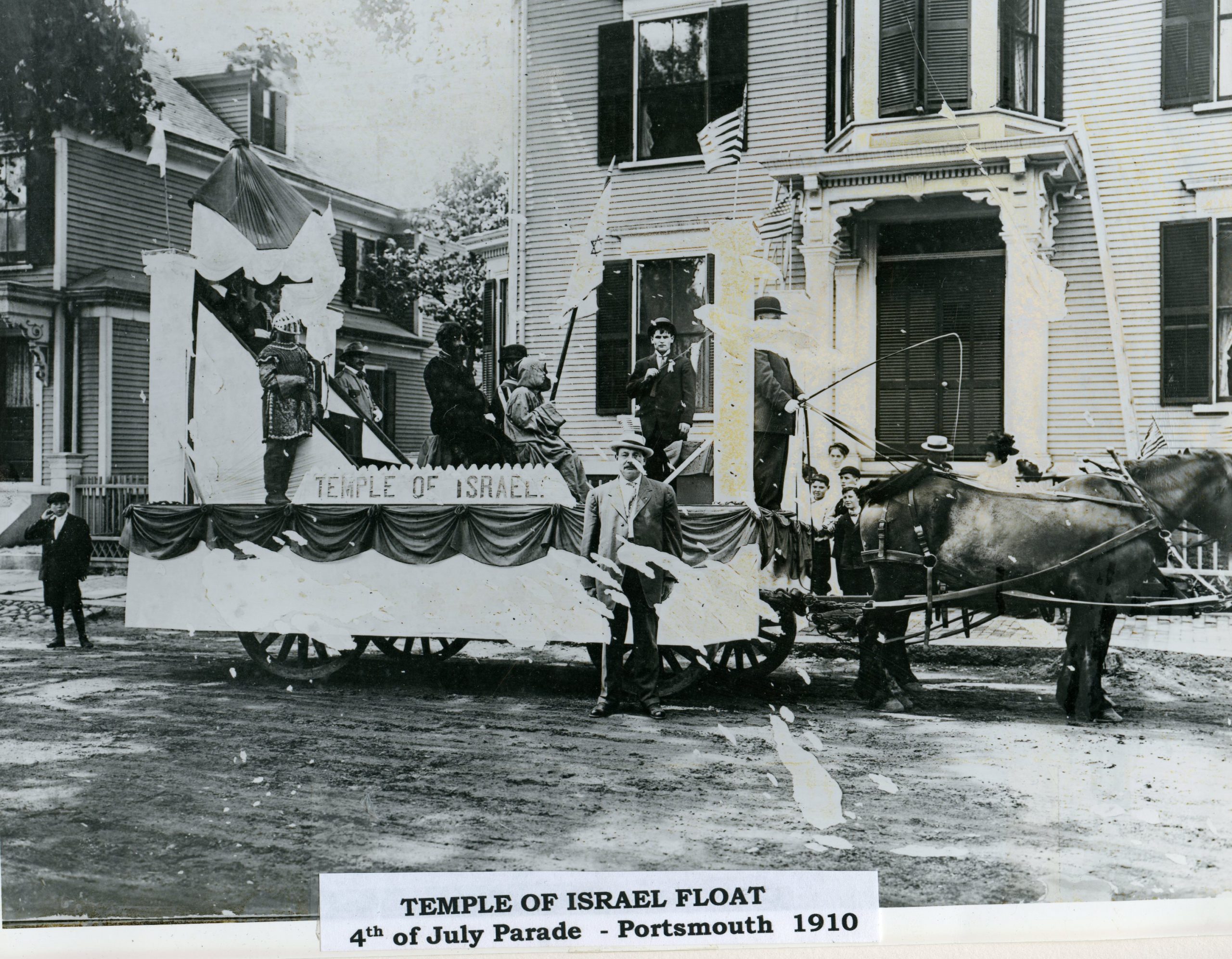 The first mention of a Jewish family living in Portsmouth can be found in Brewster’s “Rambles About Portsmouth.” Abraham and Rachel Isaac settled in Portsmouth around 1780 after arriving in America from Prussia. Mr. Isaac became an auctioneer and later started a china shop. The Isaacs were a religious family, observed the Jewish holidays, and kept their shop closed on Saturday. They adopted a son, who left Portsmouth for New Salem, New Hampshire, where he married a minister’s daughter. After Mr. Isaac’s death, his wife left the area to live with her adopted son.

The next 50 years provided no official record of Jewish families living in Portsmouth. Several Jewish families did come here from Germany, but they did not form or maintain a Jewish community. The sons and daughters of these families intermarried or eventually left the city. 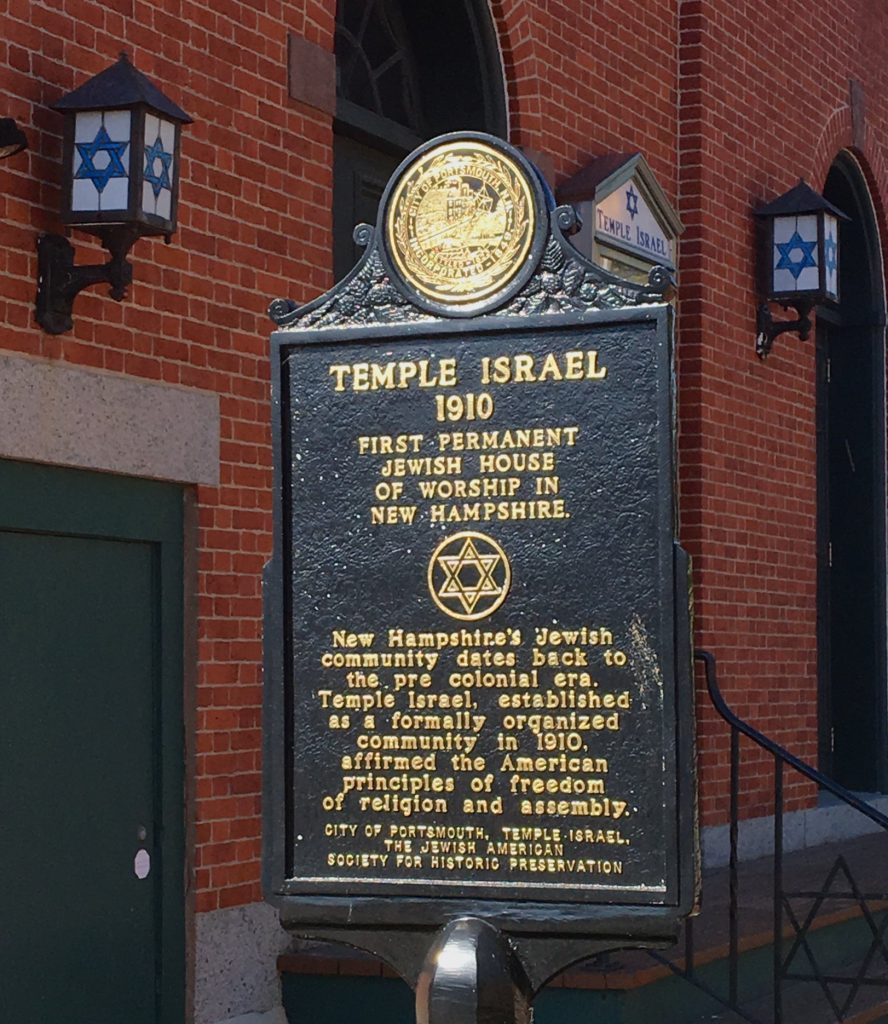 A Jewish Community Begins to Form

By the late 1880s, there was a nucleus of Jewish residents who tried to maintain their Jewish traditions. At the time, approximately 16 families were living in Portsmouth. In order to conduct religious services, the men would meet at various private homes.

This initial group of residents invited friends and relatives to settle in Portsmouth. At the turn of the century, about 30 Jewish families were living in Portsmouth. In 1905, Morris Port moved to Portsmouth from Newburyport, Mass. He came from an established Jewish community and decided that the local Portsmouth residents should become organized.

Several meetings were held, and a group was formed which elected officers, including a president, vice president, treasurer, clerk, and three trustees. This first organized congregation hired a room where they held meetings and conducted religious services. They called themselves the Temple of Israel.

The Temple’s first order of business was to find a religious leader. The budding community placed an advertisement in the Jewish newspapers of Boston and New York. Harry Liberson answered this call and was hired on the spot. Along with his work as a religious leader in conducting services, he also taught Hebrew school and prepared young boys for Bar Mitzvah. Among his other attributes, Liberson was a Shochet and a mohel. He opened the first kosher butcher shop in Portsmouth.

Another priority was to establish a Jewish burial ground. Until that time, Jews were buried in Somersworth, N.H. A committee representing the Temple of Israel purchased an acre of land on Banfield Rd. in Portsmouth from John Hett. This location became Temple of Israel Cemetery, and the first Jews were buried there in 1908. The area continues to serve as a Jewish cemetery to this day.

Formalizing the Temple of Israel with Bylaws and a Building

The third crucial need was to find a proper building to be used as a synagogue. In 1911, the Methodist Church on State Street offered its building for sale. A committee of the Jewish congregation negotiated and agreed to buy the church edifice. They occupied the new synagogue in the fall of 1912, with elaborate festivities, including a parade and speeches by notables. By this time, the community had increased to 38 families and was continuing to grow. 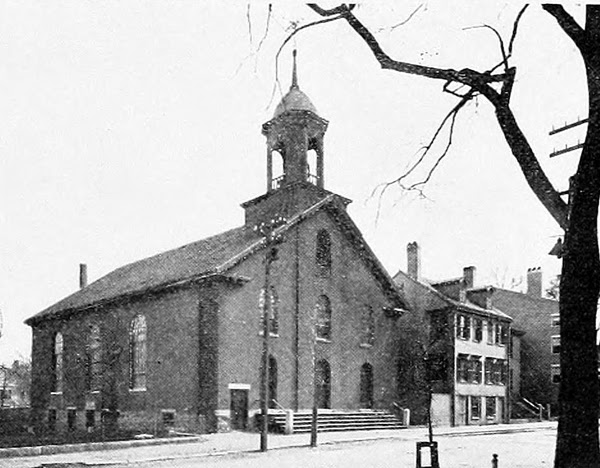 The Jewish families settled in an area close to the synagogue. Rapidly, the area near the waterfront became a large Jewish settlement. This section was referred to as the “Puddledock” neighborhood. It included two kosher butcher stores, a Jewish bakery and three Jewish grocery stores. Today, most of the area has been restored and is known as Strawbery Banke, with its historic houses and museum.

Many Jewish families moved to Portsmouth during World War I to work at the Portsmouth Naval Shipyard. Some opened businesses to cater to the needs of the expanding city. After the war, some families left the area. However, by then, the Portsmouth Jewish community had grown to include approximately 50 families.

Embracing History and Modernity Through Restoration and Renovation

The synagogue was redecorated in 1920. The vestry was used for social events and as a Hebrew school classroom. The community continued to flourish, and by World War II, the membership had risen to 75. The name of the congregation was shortened to Temple Israel. At last, the Temple was ready to hire a full-time rabbi. In 1940, the community purchased an adjacent building to house a Hebrew school. In 1967, Temple Israel, now with a membership of 125 families, expanded by adding a Community Center. This new building included a large Levenson Social Hall and kitchen, several classrooms, a library, a temple office, and a rabbi’s office.

Temple Israel has continued to enjoy steady growth through the settlement of Jewish families in the Seacoast area over the past 50 years. In the 1990s an elevator was added to ensure access to our sanctuary for all. A major renovation marked the congregation’s centennial in the 21st Century. The historic sanctuary was given new life with the addition of air conditioning and elevator access. The facility also now includes a welcoming chapel, a board room, modern classrooms comprising the Pamela Shulman Center for Jewish Education, the Nancy Mae Shaines Memorial Library housing more than 7,000 volumes, and our Schmoozatorium, a flexible space where people can socialize and relax. Membership currently stands at over 300 families, and the Religious School has an enrollment of nearly 100 children.

In 2018, Temple Israel of Dover closed, and Temple Israel Portsmouth was delighted to welcome many of its former congregants, along with many of their beautiful historic and ritual items, bringing new energy and vibrancy to our congregation.

In and around Temple Israel are QR codes that, when scanned with a smartphone, open audio files with more detailed information and history of specific rooms and items. These audio files can be accessed here as well. We encourage you to take a listen. These recordings were created in 2016 by Temple Israel’s former rabbi, Rabbi David Rafael Senter Z”L.