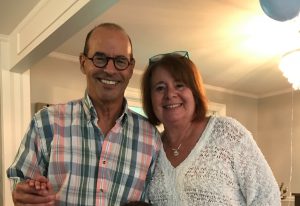 Helaine and Sanford (Sandy) Roberts moved to the Seacoast area nearly 50 years ago, shortly after they were married. Helaine was raised in Sharon, MA, and Sandy in Philadelphia. After settling in Portsmouth, they became part of the Temple Israel community. They raised their two children here and have been consistent and generous leaders for decades. Whether it was setting up chairs and tables ahead of temple dinners or working with interfaith community service organizations, no job was too big or too small.

Sandy served as Temple Israel president in 1994-1997 and again in 2010-2013. He has also served as TIP’s legal counsel during numerous negotiations. As president, Sandy always worked to bring the community together.  Members of the board of directors over the last decade remember his lovely potluck gatherings overlooking the water at his office in Portsmouth. Helaine has served on the Cultural Endowment Committee and created Temple Israel’s Planned Giving program. Temple leaders recall her spending hours going through the temple books many years ago when the job was needed. Recently, she was co-chair of our Rabbi Search Committee, which led to the successful hiring of Rabba Kaya Stern-Kaufman. Sandy currently serves on the Rabbi Liaison Committee. Sandy and Helaine are both civic-minded, temple-minded, and generous in spirit. We are so thankful to have them as part of our community.

Sandy and Helaine will be presented with their award by representatives of the Jewish Federation of New Hampshire as part of a Zoom FJNH Shem Tov Award Presentation on November 20th, 2020 at 7:00pm.