In the Beginning of the creating of all Creation, when the One that was ALL, drew into Oneself,

unformed chaos, and darkness lay over the depths- then- Divine Spirit-Wind danced over the

Waters and the One that was All said: Let there be the Light of Consciousness! And just like

that- there was Light!

And so it was- through speech- there was manifestation

And It was Good.

So the One that was All continued to speak and create, from One into Many.

Waters above and waters below, sky and oceans, Land and Seas.

And the One that was Many saw that that too was Good.

and plants and trees of immeasurable beauty with fruits of all scents and shapes and flavors.

And continued to speak and create the heavenly lights,

the sun, the moon in her phases and twinkling stars

sharing light by day and by night,

And the One that was Many saw that this too was Good,

the skies filled with feathered flying beings of light and song

and the earth filled with all manner of beautiful creatures that ran, jumped, walked and slid

And when the One that is Many manifested in All that is Present,

this elegant beauty of perfect balance

of One that is Many and Many that is One

Behold- with wonder and awe,

That This is Very Good!

And at last,  the One rested from creating and blessed this sacred pause with holiness.

And seven became one. 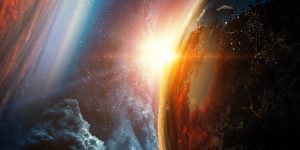 Torah reveals to us a perfect world, a world of multiplicity and polarities, that constitute a wholeness, an ecosystem in balance, a garden of Eden. Hopes are high for this gorgeous Creation.

And then human beings arrive and with them, free will, consciousness and desire which will lead to an exile from that Garden of perfection. The desire for more, to eat from the tree that was denied to them, will lead these early humans to be cast out of this state of oneness. The experience of lacking something that one desires, rather than reveling in the bounty that is, leads to an experience of separation and brings one to a state of exile. Hunger for what we do not possess leads to misery. This is part of the human story. And we also discover early on in the Torah that unmet desires also lead to jealousy, sibling rivalry and the first murder of brother against brother, Kayin and Hevel – Cain and Abel.

YET, and this a big yet, we are given this sacred text, this Torah (from the root HoRaH, meaning to show the way) as a guide and road map to get back to the garden. The six days of creation are completed by a seventh day, created for rest and re-connection. A cycle is established between six days of working for that which we desire to manifest and then, letting it all go, every seven days. Shabbat is this glorious opportunity to release the hunger for more and to instead take pleasure in simply appreciating with gratitude what is.

All of Torah proceeds from this movement: a movement from wholeness to exile, but most importantly, a roadmap for re-establishing connection and finding our way back to the garden.

May we take these lessons to heart and discover the beauty that is Shabbat, that is a state of shleimut- wholeness and peace.